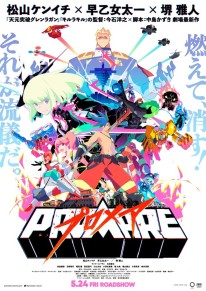 What’s the deal with firemen in anime now? Must be a new fad. Last year I went to see May and the Witch’s Flower which I thought was a real treat, this year I saw Promare. Sure my brother and I had to driver all the way to Vancouver Washington but man was it worth it. This is in my opinion one the best anime movies I’ve ever seen. Right up there with some of the movies from Ghibli.

I love every character in this movie. Every one of them has distinct and enjoyable personalities and memorable and stylish designs that fits their character. I really enjoy seeing these characters work off each other. I even like the romance between Galo and Aina. I also think Kray was an effective villain and I want to give props to this movie revealing him as the villain earlier then in the last half (I’m looking at you Disney). The real stand out characters are the two leads Galo and Leo (though my favorite character is Lucia Fex because of how crazy she is). Both have really noble moral codes. Galo could’ve just been a jerk/glory hog hero but he does have some nobility to him because wants to save people. Leo at first feels like a villain but he says that he only kills when he has to and tries to save his people.

The action scene are incredibly awesome. The opening action scene was a fantastic way to establish the characters, story and what kind of action scenes we’d be seeing. What really helped was the animation. Studio Trigger is known for its fast-paced animation and Promare is no exception. I will admit the climax did go on for a long time and there were moments it could’ve stopped there but kept going but that’s my only nitpick. Still the animation is very colorful and like I said before the character designs are perfect.

I don’t mean to betray Pixar but this is the best animated movie of 2019 and the best movie of 2019 since Avengers: Endgame. I loved every minute of it and it makes me respect Anime a lot more. If anyone from the Academy Awards is reading this please may I suggest nominating this for Best Animated Feature? I really hope Studio Trigger makes anime movies because Promare was such a beautiful lit flame. 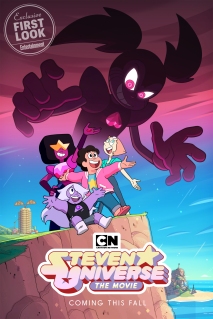 Steven Universe: the Movie takes place two years after the outcome of Steven’s journey and he really has grown up since then. Me being a fan this was the most anticipated thing this year next to Kingdom Hearts 3. Long ago movies used to have the credits before the movie instead of the end. I bring this up because Steven Universe: the Movie has all the credits at the beginning. It’s an incredible shout out to the old Disney movies (if you know me and my love for Disney that’s a good thing). It even comes with a book opening just like Disney. The opening however does lead to my main problem with the movie. The Diamonds here seem too overbearing to Steven and it feels very out of character. Sure it’s an improvement from their behavior before but still.

The previous villains may have changed too much but I do get another villain in the form of Spinel who in my opinion is the best villain of the show. Sarah Stiles is amazing as her and I love the rubber hose animation she has. It would make the animators from Cuphead jealous. Even when she’s her original self, she’s so adorable and entertaining. Her backstory about be left alone by Pink is very tragic and you understand her motivations. She even has a very catchy villain song that sounds like something from Cuphead. Speaking of songs, the songs in this movie are amazing as usual. I’ve listened to True Kinda Love over and over ever since the trailer was shown, it’s just that catchy. Happily Ever After is a good way to establish the characters and Drift Away is another great song that shows Spinel’s backstory. All the songs help move the plot forward and never stop the movie, which is what a good musical should do.

I also like how this movie deconstructs the idea of happily ever after’s. Sure Steven has stopped the empire and everything seems great now but change and conflict will happen and he’ll always have work to do. Much like Change Your Mind you could just end the show here and I’d be satisfied. You can tell Rebecca Sugar put so much love and work into the movie and it payed off. It does make me sad that this didn’t get a theatrical release like Teen Titans Go to the movies but I guess they didn’t want to risk it bombing. Steven Universe: the Movie has the same great animation, great music, and great characters that make this movie the perfect love letter to the show.

Steven Universe has such a great cast of characters. They all have so much personality and character development. Since Steven Universe the Movie premieres tonight I think this is a perfect time to show you all the top 10 characters that I love the most from this show.

10. Lapis Lazuli: This character goes through so much crap that it’s hard not to feel sorry for her. From getting stuck in a mirror to being fused with Jasper. She also works as a great foil to Peridot.

9. Bismuth: I like how she started off kind of like Jet from Avatar (both extremists trying to destroy the villains). She also has a great design and Uzo Aduba gives a great performance.

8. Padparadscha: She may not be the most complex character on this list but she’s one of the more enjoyable ones. All we need now is an episode focusing of her and Sapphire.

7. Greg Universe: In my opinion Greg is one of the best father characters in media. He’s supportive, and gives great advice to his son. Even with the death of Rose he still doesn’t let his grief control him.

6. Pearl: Pearl probably has the most depth of any of the crystal gems. Her relationship with Rose Quartz plays a big role in her development. I really liked the “finding independence” arc she has throughout the series.

5. Garnet: Who doesn’t love Garnet? She’s pretty much the embodiment of love and balance. The fusion twist helped give her more depth to her character and introduces a great couple in the form of Ruby and Sapphire.

4. Steven: One of the best protagonists in any animated series. He could have just been your generic fat kid protagonist but instead was someone who wanted to help people and saw the good in everyone (except Kevin).

3. Peridot: Best redemption for an animated character since Zuko. She also has great character development, a great design, and also great humor. I’ve always wanted a scene where she meets another Peridot like from Toy Story 2.

2. Connie Maheswaran: Connie goes through so much character development that it’s hard to picture her original self now. Her “friendship” with Steven is one of my favorite relationships in any media because it’s just so genuine and sweet.

1. Amethyst: While my favorite episode On the Run cemented her as my favorite character she still was my favorite right from the start mostly because she’s wild and fun, and yet the most mature of the crystal gems. I always enjoy when she’s onscreen whether it’s funny or dramatic.