I was going to talk about this short in my Incredibles 2 review but I had so much to say about that movie I didn’t have room to talk about Bao. Bao is about a woman who discovers a dumpling that comes alive and decides to raise him. The way the story is told and edited reminds me a lot of the Disney short Feast which told the life of a dog. The music is also good too.

Spoiler Warning: Near the end of the short the woman tries to prevent her dumpling son from leaving to the point of swallowing him. Most of the audience laughed at the absurdity while I covered my mouth in shock. It was such a shocking a moment that I didn’t see coming. It would have been funny when it fades to black it would roll the credits but let’s face it Disney and Pixar would never end on such a low note. It then turns out that the dumpling was a representation of her real son who returns to make amends. It’s very emotional and brilliant.

I think it makes sense that this was paired with Incredibles 2 because both the short and movie have a lot to do with family. Bao is definitely worthy of being nominated for the Academy Award for Best Animated Short Film. I even say it’s worthy of winning. 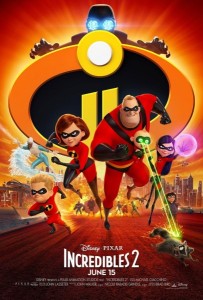 I feel like Brad Bird is one of the directors that has not made one bad movie yet. It’s been 14 years since the first Incredibles and everyone including me has been looking forward to this. I was a little concerned after the first trailer but after watching this I was blown away.

The characters that we’ve known and loved from the first one are back and there still great. I feel like these characters are better used here than they were in the original. Elastigirl is the protagonist here while Mr. Incredible was the protagonist in the first one. I think that’s clever because it makes the whole series feel like it’s about the family instead of just Mr. Incredible. Violet’s character development really shows here and Dash’s new voice is really good too.  Frozone has more screen time and Edna and Jack Jack are a great comedic pair.

While the characters are great there’s one character that’s my main problem with the sequel, the villain. Spoiler alert: It’s another twist villain as usual and it’s predictably Evelyn Deavor. I knew Catherine Keener would be the villain back when she was announced in November, mostly because she just came from Get Out where she also played a hypnotist villain. To quote Mr. Kropp, “Coincidence? I think not!”. Her evil plan is not very interesting or memorable as Syndrome tough it is refreshing to have a main female antagonist in a Pixar movie.

The first Incredibles movie had an interesting visual style that reminded me a lot of 60’s James Bond. The colors really pop out and the architype of the houses and buildings are great. The movie opens up with a new retro version of the Disney logo and it’s wonderful and clever because it helps emerge you back into the world of the Incredibles. What also helps emerge you is Michael Giacchino’s amazing score which was already amazing in the first one. The end credits also have themes songs for the heroes, I’ll never get tired of Here Comes Elastigirl. The actions scenes are also great. The Underminor scene at the beginning helps reestablish the characters and world from the first one. The Jack Jack vs a raccoon fight was hilarious not only because it’s a baby fighting a raccoon but because a raccoon put up a better fight than Syndrome. Elastigirl’s action scenes are really fun too. I can’t think of one action scene that was bad.

Kind of like Finding Dory I think I like the sequel better than the first one. Maybe it’s because the older I get the more appreciation I have for Finding Nemo and The Incredibles and now I have now enjoy the sequels. Incredibles 2 is a worthy sequel and one of the most incredible movies of 2018 pun intended.

The Loud House has finally returned with new episodes after being delayed multiple times (I thought Steven Universe had it bad). I thought I’d do my top 10 favorite Loud House sisters. I will not let episodes likes Brawl in the Family or No Such Luck affect the list.

9. Lori: Going from youngest to oldest. Much like Lily, Lori is just your basic teenage sister character. I actually do relate to her because I spend a lot of time on my phone.

8. Lola: The D.W. of the Loud House and yes she’s a prick and a demon. No Place Like Homeschool did make me respect her more.

7. Lynn: Her ego can get annoying thanks to NSL but I do like her when she’s more energetic, playful, and tomboyish like in Space Invader.

6. Luan: The comedian who’s ironically more annoying than funny. She can be a bit too much with the pranking especially on April fool’s Day. Head Poet’s Anxiety did make me like her more.

Intermission: If I were to rank Lincoln he’d ironically since he’s the middle child go in the middle of the list. Lincoln is sort of your basic 11 year old kid which helps because of the sisters’ personalities.

5. Luna: A lot of people’s favorite sister. She was the first sister to have her own episode. The reveal in L is For Love was also interesting and I’d really like to see where takes that reveal from now.

3. Lana: Out of all the sisters in those two bad episodes I mentioned I think Lana was the least bad. Tomboyish but also adorable. I’ll take Lana over Lola any day.

2. Lucy: Lucy has my favorite design of the sisters, so cute! Her deadpan monotone really fits thanks to Jessica DiCicco’s performance. I still await the day I get to see her eyes.

1. Leni: Kind of like Ed from Ed Edd n Eddy she may be stupid but she’s incredibly sweet and kindhearted. She’s also the funniest of the sisters (eat your heart out Luan) and also the most adorable (suck it Lola!). Leni is not only my favorite Loud House sister but also my favorite character of the show.