The BFG: Not one of Steven’s strongest movies but its still cute. B-

The Legend of Tarzan: Your not gonna beat Disney’s Tarzan. C-

The Secret Life of Pets: Cute but kind of a rippoff of Toy Story. C+

Star Trek Beyond: A really fun Star Trek movie. B+

Star vs the Forces of Evil: Nice to see Star again. A-

The Loud House: A-

Steven Universe: Do I even need to score this again? Fun fact: On my trip at Newport Beach I found out that some of my cousins watch Steven Universe 🙂

Now with 20 Pixar Movies It feels appropriate to list out my top 20. These are based on my opinions not that people consider the best in general.

END_OF_DOCUMENT_TOKEN_TO_BE_REPLACED 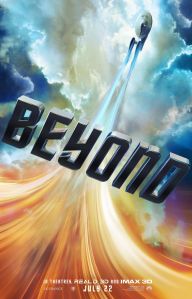 Me personally I am more of a Star Wars fan then a Star Trek fan. But I do like some of the movies. The first Star Trek from 2009 was a really good setup for the reboot and I also really liked Star Trek Over Darkness even if the last half rip offs Wrath of Khan.

I really liked the actions scenes. The scene where Krall and his ships attack the enterprise is very intense because there giving everything they got and yet the enterprise is still destroyed. The climax is also a lot of fun. The way they defeat most of the ships with music is both awesome and funny and the fight between Kirk and Krall is nice too.

The characters are still likable and fun to watch. Though I am confused on why Dr. Carol Marcus who joined the starfleet at the end of Star Trek Over Darkness is shockingly not in this movie. Jaylah was a very nice addiction. I always like those alien characters that take Earth things serious like Drax from Guardians of the Galaxy, Peridot from Steven Universem, or Starfire from Teen Titans.

If I had a problem it’s that Krall is kind of the weak villain compared to Khan from Star Trek Over Darkness. I actually thought the twist where we find out that Krall was once human was surprising and I liked how in the end he looked more human even to the point of wearing a captain shirt. But even so there’s still not much to him other then the twist.

It really was a shame that Leonard Nimoy died which is why we got a plot point about Spock reacting to Ambassador Spock’s death. The scene where Spock looks at a old picture of the crew (which has the original actors) was very heartwarming and a little sad too. It’s also sad that Anton Yelchin died a month before the movie came out. 😦 I was very happy that there was a tribute to both actors in the end credits.

Star Trek Beyond is a very fun movie and definitely one that Star Trek fans will like.

Now with that reference out of the way, let’s get to the review. This is a reboot of the 1984 comedy Ghostbusters. The difference is that the Ghostbusters are all girls. This movie was panned even before the movie came out and I was getting so sick of hearing hate about it. All I see is just a female version of Ghostbsuters, that’s it. The movie is actually enjoyable even if it was kind of pointless.

The Ghostbusters themselves are very likable and funny. Erin is good as the only sane one of the group, Melissa McCarthy is also enjoyable as Abby, Patty gets a lot of laughs and Jillian is so insane and probably the best character in the movie. Chris Hemsworth as Kevin is so enjoyably stupid. It almost makes you forget that it’s Thor.

The villain is incredibly weak and forgettable. His plan is to make a portal for ghost to pop out and he planned to kill himself to make this work. He just seems like just some weird creep who doesn’t even look that threatening. The movie is also a little too much like the original movie. The climax is them battling a giant version of a mascot.

Spoilers: Rowan turns into a 2D animated version of the Ghostbuster’s logo before turning into the giant logo. Nothing big on this but I just thought the little animation on the logo was cute and I wanted to talk about it.

Ghostbusters isn’t anywhere near as good as the original but still a fun movie to enjoy if your a Ghostbuster fan.

Verdict:
+ The Ghostbusters
+ Kevin
+ Funny
– The villain
– Recycles a little from the first one

Steven Spielberg is one of my favorite movie directors of all time. I’ve always enjoyed most of his early movies like Jaws, E.T, the Indiana Jones trilogy, and my personal favorite Jurassic Park. So I was really looking foward to The BFG.

Steven Spielberg really managed to make pretty faithful telling of the BFG. It follows the story very well and while it has changes its still focused on the friendship between the girl and the giant. Mark Rylance as the BFG is great. He captures the kindness and spirit of the book character. The scenery is very colorful. When I saw the trailers I thought it looked beautiful and it was one of the reasons why I wanted to see it. The sets are cool and the visuals like the dream tree are pretty.

The BFG however is a little childish at times. Some jokes are ok but others seemed weird. There’s a drink called a frobscottle which gives giants and people whizzpoppers (farts). Its nice for a one off gag but when the BFG brings out the drink at the Buckingham palace meal, I thought to myself, oh geeze I see where this is going. The characters drink and you know what happens. I also think the giant are way too silly and I can’t take them seriously.

The BFG is a sweet movie and while it isn’t one of Steven Spielberg’s strongest movies it’s still a cute movie to watch.

Verdict:
+Faithful to the book
+Mark Rylance
+Colorful scenery
– Humor is a bit childish
– Giants are too goofy

Thank You Mr. Rhapsodist for accepting my suggestion. Now to show how grateful I am. I will show my top 10 favorite cartoons that were released after 2010. I’ll do my top 10 cartoons of all time another time.

Honorable Mentions:
Over the Garden Wall: I almost forgot this one, but since it’s just a miniseries I didn’t include it. This however does have great animation, great atmosphere, and great songs, reminds me a lot of Fall.

10. The Legend of Korra: Good lead up from Avatar the Last Airbender. Korra is a good protagonist because she grows from a violent teenager into a more peaceful adult.

9. BoJack Horseman: It’s only at number 9 because I haven’t watched a lot in a while. While the animation and character designs are weird at times, the writing and comedy is very well done.

8.The Loud House: I already reviewed this but I’ll say it, Nickelodeon is back! The characters are likable, and the comedy is funny.

7.Star vs. the Forces of Evil: Star is a great protagonist, I love her energy and enthusiasm. I can’t wait for season 2.

6.We Bare Bears: Ice Bear is the best. The three bears are so likable and funny and I also like how people just take the fact that there are bears walking around the city. Also, remember in Inside Out where Disgust said there are no bears in San Francisco? Boy was she wrong.

5.Bob’s Burgers: The first season is just OK, it gets better over time. I think that this is the best Fox cartoon on right now.

3.Gravity Falls: Out of all the cartoons on this list, this was the cartoon I always looked forward to since there would only be one or two episodes a month. I love the character designs, animation, and backgrounds. While it sadly only lasted two seasons, so much effort was put in and it paid of as one of the best Disney cartoons ever. Fun Fact: this show takes place in Oregon which is where I live.

2.My Little Pony: Friendship Is Magic: I really like this cartoon. I think the mane 6 have distinct personalities and work off each other very well. The world of Equestira is great and interesting to explore. Starlight Glimmer was a nice addition even if she’s only appeared for five episodes of season 6 so far.

1. Steven Universe: I’ve talked so much about this show but who can blame me, it’s a great cartoon.