Happy Halloween everybody! I apologize for the lack of movie reviews lately. It’s mostly because I’ve been busy with my job and that some of the movies I’ve seen didn’t have much to talk about. Next month will be better, trust me.

Movies:
The House with a Clock in Its Walls: A basic family fantasy film. Though Jack Black and Cate Blanchett work off each other wonderfully. C

Smallfoot: While it does have an interesting lesson about lies and the truth, it’s still your run of the mill animated movie. C

Venom: Tom Hardy is a way better Eddie Brock and Venom than Topher Grace but the weak story and plot holes keep it from being good. D+

Bad Times at the El Royale: A mix between The Hateful Eight and Baby Driver with a creative narrative structure and wonderful performances. B+

Coraline: This was showing at Mount Hood Theatre (nice small theater)  so I thought I’d see it again. Coraline is my favorite stop motion animated movie because of it’s imaginative animation and story. A+

Halloween: I’m not a huge fan of horror/slasher films but this was a good continuation of the series. Gory but also good direction. B

Hilda: To quote Grunkle Stan, “oh this, this is beautiful”. Hilda is one of the most beautifully animated shows right now and one of best cartoons on Netflix. I can’t wait for season 2. 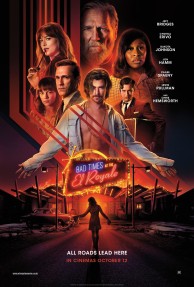 When watching the trailer for Bad Times at the El Royale it felt like a  mix between The Hateful Eight and Baby Driver. When I saw the movie, it’s pretty much like that with a little bit of Pulp Fiction added into it. The movie takes place at a hotel called the El Royale which stands between the border of California and Nevada. The hotel is a neat location because of how isolated it feels, similar to the lodge from The Shining. I also like the gags where the California side is $1 more than the Nevada Side and that gambling is legal on the Nevada side while alcohol is legal on the California side.

Bad Times at the El Royale has a small batch of characters each given time and their own chapters to focus on them. What helped make these characters interesting was their performances. I think Jeff Bridges as a sort of Catholic Priest was the real stand out of the cast. I also did like Lewis Pullman as the sole worker at the hotel. The movie is structured in chapters. It’s sort of like how Pulp Fiction is told out of order Sometimes theirs a chapter that’s happening simultaneously with another chapter. There are also chapters that show the backstories of the characters when time is right to show them. It’s really interesting storytelling and everything feels put together perfectly. Though sometimes the stories do drag a little. It’s an similar issue I have with BlackKklansman which also had an over long run time.