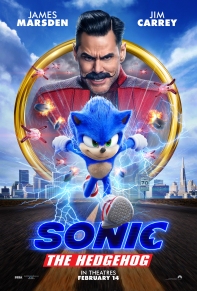 2020’s Sonic the Hedgehog is the first film adaption of the video game character. This movie had a lot of controversy when Sonic’s design was revealed. I think it was for the best here that this movie was delayed to redo Sonic’s design because the original design was awful and I am not alone here because so many people thought it was awful too. Thankfully his design now looks so much better and more true to his video game counterpart.

In terms of characters, Sonic the Hedgehog has the same pros and cons as Birds of Prey. Ben Schwartz does a good job as Sonic. He has a lot of energy and Jim Carrey is delightfully devious as Dr. Robotnik and while his doesn’t exactly resemble his video game counterpart his performance help make fun to watch. It’s a nice return to Jim’s cartoonish performances like the Mask, the Grinch, the Riddler, Count Olaf etc. etc.  The supporting cast much like Birds of Prey are not really interesting and feel more like they were added because the movie didn’t have enough characters.

The story I also think is pretty standard for a movie. It follows the same story beats and clichés you’d find in other kids movies. The comedy can be good at times but sometimes the jokes are like ones you’ve heard in other kids’ movies. Sonic’s super speed does lead to some really fun visuals like in the bar scene or when he’s hanging out at his cave. I think this might be closet were getting to a Flash movie for the time being.

There’s not many references to the games but I assume there saving a lot of them if it gets a sequel. Fans of the Sonic the Hedgehog character and video games and kids who are looking for a fast paced family flick (pun intended) to watch will enjoy this. Now where the heck is my Sly Cooper movie?! That’s the real quesiton I’m asking.