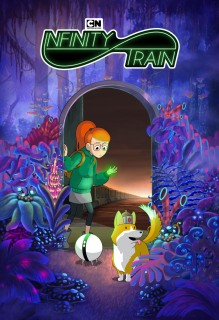 I remember watching the pilot for Infinity Train back in 2016 and thought that it would make for a great show. Three years later the train has finally reached the station and fortunately it was no train wreck. There’s such a mystery to this series that makes want to know what’s going to happen next and the payoff it handled very well.

Infinity Train is like a video game but I don’t mean that the show takes place in a video game but more that it feels like a video game. Think of it as a point and click adventure game mixed with Earthbound. Each episode has Tulip go through a different cars kind of like levels in a video game which seems fitting since Tulip (also my brother) wants to be a game designer. The cars are really creative and feel unique from each other. The episode with the ball pit car is great because it starts with a lighthearted adventure thru a place area similar to the ones at McDonalds but then takes a dark turn when the conductor shows up.

Tulip played wonderfully by Ashley Johnson is a really good main character. Sure she does start off as a jerk but I think the idea of character development is to turn an unlikable character into a likable character and Tulip’s arc about dealing with her parents divorced brings. One-One is a very likable ally to Tulip. I really like his split personality and how they work off each other. He’s kind of like a non-evil Wheatley. Another character that stood out to me was the villain. The conductor could have just been some generic evil robot but instead was a very tragic villain who just wants to recreate the life she had before her love died. She works as a perfect evil counterpart to Tulip because she’s basically her if she didn’t deal with her trauma.

While I am glad that Infinity Train will return someday I do think this felt like an already complete story, you could just end it here and I’d be satisfied with its conclusion. Infinity Train is the best Cartoon Network miniseries since Over the Garden Wall. It’s got comedy, drama, great characters, great animation and it’s just one heck of a fun train ride.