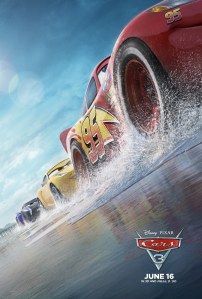 The Cars movies are considered the worst of Pixar, though I kind of like them. Back in November 2016 Pixar released a teaser for Cars 3. It showed Lightning Mcqueen crashing in what might just be the darkest teaser for any Pixar movie. Still by seeing the trailers I could tell what was gonna happen. Lightning crashes and has to train with Cruz. It’s kind of predictable.

Lightning McQueen has become more character development in this one. He has to deal with retirement. Cruz Ramirez is also a fun character and her arc about becoming a racer is great. Jackson Storm however is incredible bland and forgettable. He’s just there so that Lightning can have a rival and he’s not even in the movie as much as you’d think he be. His fate is also ambiguous because the last time we see him was when he crossed the finish line and we don’t even see him again.

The movie’s theme about old vs new is handle very well. Especially in the opening scene. It starts when Lightning racing with some of his friendly rivals, but then we’re introduced to Jackson Storm and then more new rookies. More old cars start retiring except Lightning to the point where he’s the only one racing until he crashes (surprisingly more intense then the promos). It’s kind of like the opening of Up or Inside Out and it helps establish how new technology is taking over. Heck, the last line of the whole movie which is in the end credtis scene is Mater saying frustratingly “technology”.

I should also talk about the Pixar short Lou. Lou was very cute. It had really fun and quick animation. The creature kind of reminds me of Hank the octopus from Finding Dory.

There are no references to Cars 2. Not one mention of Finn Mcmissle or Mater being a spy. You can just skip Cars 2 and not miss anything. Cars 3 in my opinion is the best Cars movie out. I would even call this the true Cars 2.